Every year students of class 12th work hard to score good marks in the board examination so that they are one step closer to getting admissions in renowned colleges. While having thought of holistic development and availability of a wide array of courses students are often clicked by the name of DU.

The UNIVERSITY OF DELHI or DELHI UNIVERSITY (DU) has grown into one of the largest universities in India with providing quality education. There are 77 colleges and 16 faculties affiliated to it. Not only does DU offer various courses for the students but also organizes the best college fest too to help students showcase their talents.

Here is a list of 10 top colleges under DU that offers best to their students:-

Lady Shri ram college of commerce is established in 1956 LSR is an all-women college. LSR is ranked 2nd among colleges in India by the NIRF in 2020. It is popularly known for its annual cultural fest TARANG along with its quality education. It offers various courses like B.A(HONS), B.COM (HONS), B.SC, B.ED, JOURNALISM and MASS COMMUNICATION, etc. Some notable alumnae are Sanjana Sanghi (actor), Aditi Rao Hydari(actor), Gauri khan ( film producer& interior designer).

Hindu college is established in 1899 it is one of the oldest for ARTS & SCIENCES in India. It offers UNDERGRADUATE and POSTGRADUATE programs in SCIENCES, SOCIAL SCIENCE, COMMERCE, and HUMANITIES. It has been awarded as ‘star college’ for its department of Biotechnology. The college has produced many notable alumni to name a few are Imtiaz Ali( film director), Gautam Gambhir(cricketer), Subramanian Swamy (economist, politician, former minister).

St. Stephen’s College is a premier college of DU. It is recognized as one of the oldest and most prestigious colleges for ARTS & SCIENCE in India. And, it was established by the CAMBRIDGE MISSION TO DELHI. It offers courses for SCIENCES and LIBERAL ARTS. The college has produced a line of distinguished alumni Shaktikanata Das (governer of RBI), Rahul Gandhi( president Congress), Kapil Sibal(former law minister).

Shri Ram College of Commerce is one of the most reputed commerce colleges in India. SRCC ranked 1st best commerce college in India by INDIA TODAY in 2020 and is ranked 12th among colleges in India by NIRF in 2020. It offers various UNDERGRADUATE and POSTGRADUATE courses in COMMERCE, ECONOMICS, and BUSSINESS. Some notable alumnae are Arun Jaitley(politician), Rakeysh Omprakash( filmmaker), Rajat Sharma (journalist), Sejal Kumar (YouTuber).

Sri Venkateshwara college is a co-ed & constituent college of DU. Established in 1961 it is considered as one of the best institutions in the country for SCIENCES, COMMERCE, and HUMANITIES. Vocational courses and short term courses available are an add-on to the academic profiles of students. Varun Sood( actor &vj), Puneet Gulati (CEO Barista), Aditi Singh Sharma (singer), Amit Luthra( golfer)are a few notable alumane.

Deen Dayal Upadhyaya (DDUC) is one of the top colleges of DU. It was established in 1990 in the memory of Deen Dayal Upadhyaya a known philosopher and social worker. The college has student organizations both academic and cultural which organize extracurricular activities. The institution offers various undergraduate courses in a wide array of fields. Koyal Rana (model) has been a part of this institution.

Gargi college is all women’s college affiliated to DU. Established in 1967 the college offers education in ARTS & HUMANITIES, COMMERCE, and SCIENCE. It is one of the leading south campus colleges of the University of Delhi. The college arranges inter-disciplinary seminars, summer workshops which helps students develop an all-round education. The college firmly believes in holistic development. The names in the list of notable alumnae are Huma Qureshi( actor), Urvashi Rautela (miss diva 2015&actor), Sanya Malhotra(actor), Hina Khan(actor).

NOTE:- The rankings are according to the report of National Institutional Ranking Framework (NIRF) 2020.

Top 10 Colleges For Engineering In Karnataka 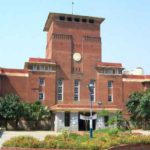