Gender Equality: Why is it important?

Women aggregate half of the world, which should undoubtedly mean an equal division of power, rights, freedom between both the genders: male and female. However, had this been the case, why would we still be talking about gender equality. Because come on, we are in the 21st century, we have certainly achieved gender equality. Women are working, driving, flying planes, and whatnot. But the reality is far from this.

On the one hand, Sunita Williams holds the record for most spacewalks by a woman and most spacewalk time for a woman; on the other hand, female infanticide and dowry systems still prevail in underdeveloped countries like India. Do you know that India ranks at 112th among 153 countries in the Gender Gap Index 2020 published by World Economic Forum? This is something to worry about.

What is gender equality

Gender equality is when people of all diversity have equal rights, responsibilities, and opportunities. Everyone is influenced by gender inequality – women, men, trans, and gender diverse people, children, and families. It reshapes people of all ages and backgrounds. Gender equality is the need of the hour. It prevents violence against women and girls, is essential for economic prosperity for any society. Societies that value women and men as equals are safer and healthier. Gender equality is a fundamental human right.

Why is gender equality important

Prejudice against women and girls is a pervasive and long-running phenomenon that delineates Indian society at each level. India’s progression towards gender equality has been disappointing, despite reasonably rapid rates of economic growth. While the Indian economy has grown by around 6%, there has been a massive deterioration in female labor force sharing from 34% to 27%. The male-female wage gap has been stagnant at 50% (a recent survey finds a 27% gender pay gap in white-collar jobs).

Crimes against women show a skyward drift, particularly brutal crimes such as rapes, dowry deaths, and honor killings. These trends are troubling, as a logical prediction would be that with growth comes education and prosperity, and a possible decline in adherence to traditional institutions and socially prescribed gender roles that hold women back.

Cultural institutions like patrilineality (inheritance through male descendants) and patrilocality (married couples living with or near the husband’s parents) play a pivotal role in disempowering women.

An innate parental inclination for sons —since the notion that sons serve as caregivers for parents in old age — is linked to more ominous consequences for daughters.

The bride’s family’s payment to the groom’s at the time of marriage, the dowry system is another institution that disempowers women. It is sad to hear that this has been firmly rising over time across all socioeconomic classes. This often results in domestic violence against women by their in-laws to demand more payments.

These practices create parents’ reasons not to have girls or invest less in girls’ health and education. Such parental preferences are reflected in increasingly masculine sex ratios in India. In 2011, there were 919 girls under age six per 1000 boys, despite sex determination being outlawed in India. This strengthens the inferior status of Indian women and puts them at risk of violence in their marital households. According to the National Family and Health Survey of 2005-06, 37% of married women have been victims of physical or sexual violence perpetrated by their spouses.

It is so important to empower women to spur productivity and economic growth. Unfortunately, there is still a long way to go to achieve full equality of rights and opportunities between men and women. Therefore, it is of supreme importance to end the various forms of gender violence and secure equal access to quality education and health, economic resources, and political life participation for women and girls and boys. It is also essential to achieve equal opportunities in access to employment and positions of leadership and decision making at all levels. As of 2018, only 24 percent of all national parliamentarians were female, a slow rise from 11.3 percent in 1995.

The UN Secretary-General, Mr. António Guterres, has stated that achieving gender equality and empowering women and girls is the unfinished business of our time and the most significant human rights challenge in our world.

Facts to be worried about and need to be changed

Achieving gender equality is something that will not happen overnight. It is crucial to work collectively with communities, schools, workplaces, businesses, and organizations to build a respect and fairness culture.

All of us have a role to play in promoting gender equality.

Women aggregate half of the world, which should undoubtedly mean an equal division of power, rights, freedom between both the genders: male and female. But because of the prevailing patriarchy, women are always treated as inferior to men. Gender equality is when people of all diversity have equal rights, responsibilities, and opportunities. Everyone is influenced by gender inequality – women, men, trans, and gender diverse people, children, and families. Gender equality is the need of the hour. It prevents violence against women and girls, is essential for economic prosperity for any society. Societies that value women and men as equals are safer and healthier. Gender equality is a fundamental human right. 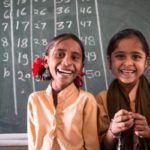 Education of Girl Child in India