If you want to know about the signs to know if a person is suicidal, you are in the right place. This pandemic is snatching away lots of lives of our closed ones. After that, there’s no option left rather than standing and wondering what just happened to us. No matter how hard we wish for them to come back again, we just end up realising our huge loss. So in this article, I will share a few signs of a person developing suicidal tendencies so that we don’t have to regret later and can act immediately when it’s needed.

Remember one thing, suicide is not any disorder, it’s just the consequences of thinking that there’s nothing left in life, thereby the person gives up entirely.

So here are few signs of a person who is developing suicidal tendencies in their thoughts.

A person who is willing to commit suicide will someway or other give a sign to their family members or close ones. Now maybe not every person who gives such warning may actually commit suicide. Even not every person who is trying to commit suicide will give you a catchy warning. As a result, it gets really difficult to understand who actually needs help. So I would suggest you take every warning seriously even if you believe that the other person must be joking. This is because you should never take a risk to lose a chance of saving someone. If you see this sign, the person is suicidal.

A person who is in severe depression may end up sleeping a lot more than usual and not being able to leave bed. Even a person may face sleeplessness due to taking up a lot of stress and insomnia.

Now you must be asking that these sleep patterns are common in a majority of people and mostly during this pandemic but that doesn’t mean that they are all going to commit suicide right? Well of course not, but these sleep patterns are somehow related to depression and may provoke a person to think of something you could never even imagine about right? So never take anything for granted. If you see a person having abnormal sleep patterns or they tell you about their sleeping problems then do listen to them carefully and try replying or talking to them in a convincing manner in order to make them feel that you are always there for them whenever they need help.

We often tend to compare things with our lives and end up saying something which may trigger the other person’s suicidal thoughts. So always notice things carefully. If you see this sign, the person is suicidal.

A person who is suicidal may show signs of making preparations on suicide. This may include cleaning up rooms, destroying few pieces of evidence that they were in a depression, giving away their possessions, bidding a final goodbye to close ones or maybe even a final emotional hug. They may also include buying up stuff for self-harm like sleeping pills, ropes, poison. If you see someone doing so, just don’t leave them alone. You may find nothing depressive in their behaviours but they may be just waiting for something to hold them back to commit suicide. Just interact politely with them because they may not tend to open up initially. If you doubt strongly about someone then don’t leave them alone. If you see this sign, the person is suicidal.

One being excessive emotional outbursts and always in need of someone who will always be available to listen to their problems without any sort of comparisons or judgements. They will become desperate to connect with someone at least who tries to understand them. But when they don’t receive care from another side, they end up being in depression which leads to suicidal thoughts. So if you see someone like this, do listen to their problems and try to give thousands of solutions to prove that suicide is not the only option left for them.

On the other hand, the second type of people would just try to isolate themselves from their surroundings. They will totally shrink themselves socially and would not prefer much interaction. Staying alone for so long will lead to various thoughts and finally leading to suicidal ones. So if you see someone suddenly becoming cold and isolated, try much more to interact with them even if they don’t want it from their side. If you see this sign, the person is suicidal.

So these were very common signs that are at least a bit noticeable. If you find these signs then do have some deep interactions and conversations with them. This doesn’t mean that every person who shows the above-mentioned signs have suicidal thoughts, but at least these signs may help you detect a person who may think about committing suicide. So hopefully this article will help you and after reading this you will get a fine idea about how to deal with some delicate issues like this.

Top Methods To Ace An Examination

How to top in 12th Biology exam 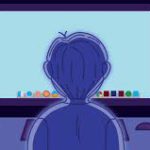